Gun Control, in Light of the Florida Shooting 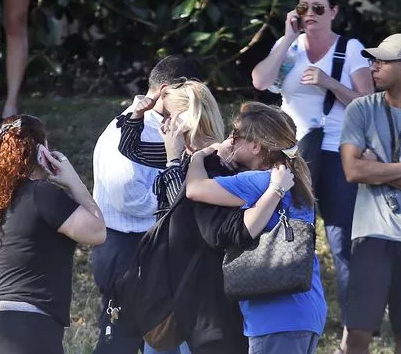 Last night, when I heard the news–that 17 innocent people had been killed and numerous had been injured at Stoneman High School in Florida–I was very very sad. But I was also angry. Because this has happened so many times in the past. And it will happen again, because our country is in denial, caring more about keeping their weapons than keeping their schools safe.

One year ago, the survivors and families of victims at Columbine High School and Virginia Tech College appealed to the Republican congress to change gun control laws. And today we see what has happened because they did not.

I understand why some people say that we should control “the people and not the guns”. After all, there are specific types of people who, again and again, are the people who mass murder others with guns. But how can we control these people? At Stoneman, people knew the suspect in the shooting, and knew that he was the type of person who might do such an atrocious thing. But they did nothing about it, and (arguably) there was nothing that they could do about it. Since guns are so legal and unregulated in the U.S., it was completely legal when he was posting disturbing pictures of his weapons on social media, and ranting about how much he loved “hunting”.

We need to change the situations that lead to massacres. Instead of blaming the wrong things and then looking the other way until it happens again, we need to take action now.