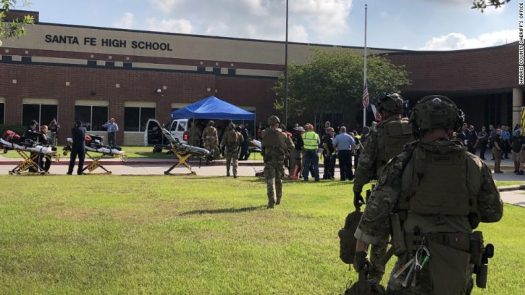 Friday May 18, 2018 — At least eight people — and as many as 10 — have died as a result of a shooting Friday morning at a high school in the southeastern Texas city of Santa Fe, Harris County. A male suspect, believed to be a student, has been arrested in the shooting at Santa Fe High School, as well as another student reportedly detained. Witnesses described students running from the school as they heard gunshots; they also described hearing an alarm at the school, saying it wasn’t immediately clear what was going on.

This is the third school shooting in eight days, and the 22nd since the beginning of the year in the United States. On Wednesday, an Illinois school resource officer shot and wounded a former student who fired a weapon near a graduation rehearsal at Dixon High School, authorities said. The suspected gunman faces three charges of aggravated discharge of a firearm. On May 11, a 14-year-old boy in In Palmdale, California, went to Highland High, his former school, and began shooting a semiautomatic rifle shortly before classes began. He was taken into custody and is accused of attempted murder. One person was wounded. There has been, on average, 1 school shooting every week so far this year.

These tradegies come after recent spark in conversation over gun control in the US, with many students asking “What can we do? How can we stop this from happening again?” Teenagers around the nation are beginning to stand up and demand change from their government and representatives, shown by the student-led demonstration in support of tighter gun control that took place on March 24, 2018, in Washington, D.C. Thousands of students and supporters attended the March for Our Lives, including many from right here in Lakewood.

It is incredibly easy to get a gun here in America, and with more gun control and the banning of automatic weapons we may be able to stop another tragedy like this from happening again.