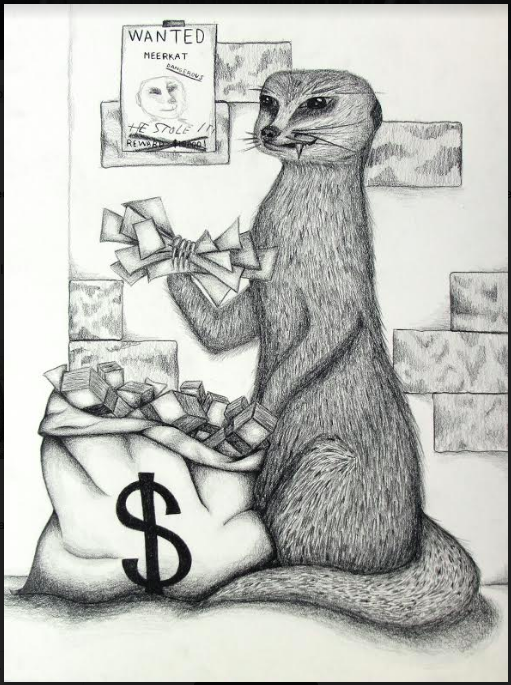 Meerkat by day, ninja by night.

Everyone else in my mob likes to make fun of me, but it’s not like I see them doing anything to help.  They whine and complain about the lack of space in our current enclosure, but are too big of wimps to take matters into their own hands.  Not to mention that they don’t believe in my rational proposal. It’s a good thing they have me, the “ninja by night.”

If I don’t get head spot in the new enclosure, someone’s gonna get hurt.

I’m still only halfway there, even after the large amounts I’ve been taking, night after night.  It’s incredible, the stash he has, and I’m starting to get tempted to just take it all at once. I was shocked when Tommy told me how much the zookeeper said it would cost.  It was a lot smaller than I thought it would be, and I seriously doubt that he would notice a few missing zeroes from his stash.

I’m so busy daydreaming about bagging handfuls of cash, that I don’t even notice Willow come out of her hole, and head straight towards me.

“Pete!” she calls, in a voice that is nowhere near friendly.  “What happened to your ‘ninja’ status?”

She extends a furry hand, and I notice that there’s a paper enclosed in it.  “Take a look at this, Mr. Stealth.”

I take the crumpled white paper out of her hands and unfold it to find a picture of…me?

“You think?”  Snatching it out of my hands, she scratches the number off with her paw.  “I thought you said he wouldn’t see you!”

“I didn’t think he did!” I whisper-shout, self-consciously looking around at the rest of the mob, some of which who are beginning to stare.  “It was one second.  The flashlight shone on me for a single second.” I shrug it off, taking a last glance at the paper.  “I’m just glad you found the wanted poster before anyone else saw it.”

She looks up, and even her face reeks of sarcasm.  “Pete, you dummy.” she breathes, rolling her eyes. “These things are all over New York City!”

All over…New York City?  My heart drops. The size of New York City has ten times more zeros than the cost of our new enclosure.  I look up into her beady black eyes, and she seems almost satisfied with herself, as if her point that stealing the money for our new home wouldn’t work was proven.

Yeah, right.  As if a few wanted posters are going to stop me.

“All right,” I say, putting my hands up in surrender.  “It’s settled.”

Relief floods her face, and she almost smiles.  “Thank goodness, Pete. I told you from the beginning, robbing him won’t work.  I’m glad you’re finally starting to see that.”

Now it’s my turn to look satisfied, and I almost feel bad as I feign confusion.  “What do you mean, Willow? I just meant I would take it all tonight, not call off the heist completely!”

Her smile drops, and her head snaps up.  “What? No! Pete, you little pest…”

She snarls, the poster crumpling in her grip as I retreat back to my hole.

“Be a meerkat by day, and a ninja by night!” 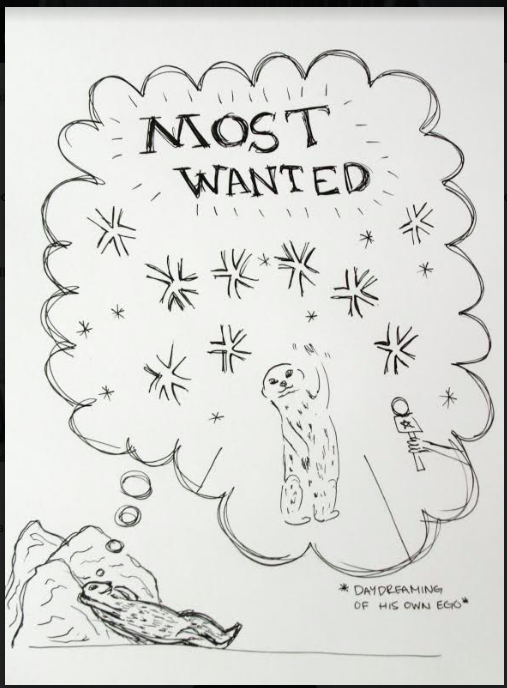 I spend the rest of the afternoon daydreaming and unashamedly soaking in my own ego.  Wow. NYC’s most wanted. The title seems to fit me well, and instead of hiding it away, I want to show it to the world.  Oh yeah, the seventh richest man in the world got robbed by a meerkat.  The thought of him waking up tomorrow missing a few zeros from his balance makes me laugh.

As the sun sets, I make sure I have everything ready.  Four, instead of the usual two bags to stuff the cash, and a bobby pin stolen from Abby, the zookeeper.  It was a horrifying experience, the first time I tried to pick the lock to his office with the innocent bobby pin.  It was my first robbery, and I had no idea whether it would work or not. Now, I laugh at the thought of my trembling, sweaty paws desperately grasping at the lock.  I was so inexperienced.

The sun sets seemingly quicker than usual, and the nerves finally start to kick in.  He would probably be waiting for me, or at least have his precautions raised. And I was taking four bags tonight, instead of two, so it would be longer to rob and tougher to carry out.

I force myself to think of the new enclosure instead of anything that could go wrong.  The beautiful pools they had promised us, the roomy holes instead of the cramped ones. Real plants, instead of the fake ones they had now.  The dreamy thoughts of the oasis carry me through the sunset, and before I know it, it’s pitch black outside.

The stars cheer me on, my number one fans.

I tie the empty bags around my waist, making my escape easier.  With ease, I climb to the top of one of the small trees in our enclosure.  It’s harder to see in the night, but after weeks of practice, I jump without fear.  Using the bags as a sort of parachute, I paraglide from the tree and past the low glass wall that divides us from the humans.  I grin to myself, ninja by night echoing in my ears.

Once I leave the zoo, I begin the trek to the rich guy’s mansion.  It’s about a twenty five minute jog, another five minutes added to take the back streets.  Normally, I wouldn’t, but newly becoming a criminal, I decide to take the safer route.

The journey there is simple, but there’s something nagging at me the entire way there.  I keep hearing phantom sounds from behind me, which isn’t helping my nerves. Several times, I stop and look behind me to investigate, but there’s nothing there but a few plastic bags and cups with the green lady on it.

Finally, I arrive at the intimidating mansion.

It’s huge, and reeks of greed.  There are so many windows to choose from, that the first time I broke in, I couldn’t decide which window to break in through.  Eventually, I settled on one in the back, on the second floor. In a streak of sheer luck, I had found that it led directly to his office, which led to the vault.  Now, I make the familiar path to the same window.

With ease, I climb up and settle on the window.  Using Abby’s bobby pin, I slide it through the lock on the window, and maneuver it to click open.  I sigh, releasing a breath I didn’t even realize I was holding.

I’m just glad this guy decided to stick to archaic methods of security.

There’s no alarms in his house, just security guards posted here and there.  I heave open the window and slip inside noiselessly. The office is a chilling quiet, devoid of the howling wind outside.

Without hesitation, I hop over to the bookcase to the left of his desk and pull down a book in the lowest shelf.  It took me a while to find the lever to the secret vault, but once I saw the book titled Secrets of the Millionaire Mind, there was no trouble getting in.

Once I pull it down, all secret agent style, a portion of the bookcase creaks open, and I cringe at the nose it’s making.  After a moment, I the noise stops, and I slip through, my bags flying in the wind.

This guy is so stupid that he doesn’t even think to put another lock on his dough.  It all lays out, neatly stacked in boxes, practically begging to be taken. My heart beats faster at the sight of it, and without a sliver of indecision, I begin to pile it into the bags.  The money seems huge, too big and heavy for my tiny paws to grasp unto. It’s neat piles are ruined as I stuff them clumsily into the bag.

I’ve filled three of the bags to the brim when the door slams shut.

In a flash of fear, I whip around to come face to face with a bright light, one of the security guards shining a flashlight in my face.  Desperation runs through me. I’m caught right in the act, and the lady is blocking my only way out of the room.

“Ha!  Got you now you miserable rodent…”

She charges at me with a net that I hadn’t noticed before.  Without consent, my paws take off by themselves, and I jolt just barely out of her reach.  I run across the room, straight for the door, but her long legs are quicker and cut me off, backing me right into the corner.

“Oh no, you’re not going anywhere you pathetic pest!”

Realization shoots to my head, and I know that I’m done for.  She’s locked me in, cornered me. Her evil, cherry red grin is growing closer, and in an unwilling defeat, I shrink down to avoid the claws of the net.

Suddenly, without warning, she jerks back and screeches in pain.  “Ow! What the…WHAT!” she drops her flashlight and it spins around the room, making me dizzy.  She continues shouting at a phantom pain, one that I can’t see. Running away from the corner, I don’t stop to find out in another rush of luck.

Without warning, her cries stop.

“I’m the only one who’s allowed to call him a pest’, you overgrown naked mole rat!”

I look up to find the human knocked out, the back of her bright orange hair ripped out.  A shadow crawls up to her face, one unmistakable.

I expect her to run over to me, but instead she runs over to the bags of spilled money, frantically beginning to scoop the bills back in.  “Come on, pest,” she says glancing over with a smirk. “Let’s hurry this up.”

I’m frozen, shocked clueless.  “But…I thought you were against robbing him!”

She laughs and shakes her head.  “Nah. I thought about it, and he deserves this for taking back his offer to donate money for our new enclosure.”  She waves a hand at my shell shocked face. “Hello? Earth to Pete? We’ve got a robbery to finish!” 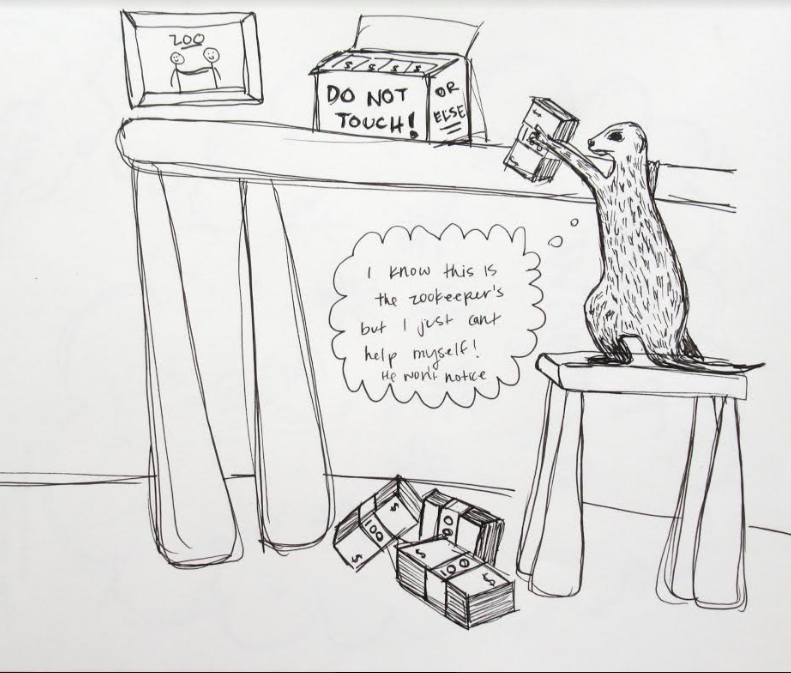