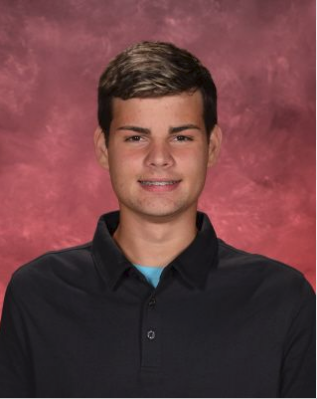 The week, we have junior Dominic Plzak. He’s quite the unique student and has already made his mark at LHS, even if he’s only in his junior year.

So I talked with him and asked him some questions.

“What do you like about LHS in the time you’ve been here?”

“What I like about LHS is that I had experience with foods with Miss Manning first semester of my freshman year of high school and another thing that I like about LHS is that last year when I was a sophomore in high school I got to play tennis for Lakewood High School it was so amazing I got to meet new friends on the team and everything I mean tennis was just so much fun and this year as a junior the first semester this year as a junior I took government with Mr. Thome which he is a very nice guy and he’s not just a government teacher he’s also a football coach. And that’s what I like about LHS there’s a lot of new friends to meet it’s just so amazing, And there was a lot of different people that I never met before and some that I did which was amazing.”

“What is your favorite subject?”

“My favorite subject is Art because I really like to draw paint and sculpt too bad I’m not really taking any Art classes this year hopefully I’m in Ceramics next year I didn’t like Art 1 my freshman year of high school and they took Art 2 last year when I was a sophomore but so far my favorite subject has been English because it got me interested in reading Between Shades of Gray.”

Dominic is known for being a cheerleader, which is uncommon here at Lakewood High for a guy, so I talked to him about that.

“When did you start doing cheer-leading?”

“What made you want to do cheer-leading?”

“How does it feel to be the only guy on the cheer-leading squad?”

“Would you do cheer-leading in college?”

“Yes, of course I would say heck yeah I would love to do cheer-leading in college it would be so much fun.”

“What would you say to other boys who want to do cheer-leading but are too nervous to try?”

“Heck no I am never too nervous to try anything I feel strong and powerful to try anything even teach boys that are interested in the cheer-leading squad my double kicks.”