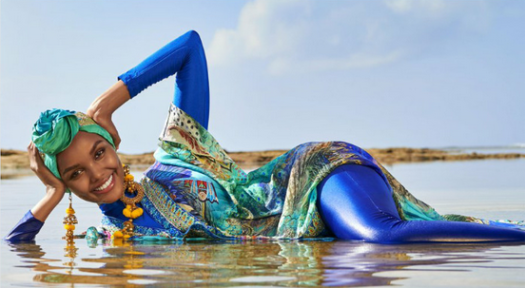 Somali-American model, Halima Aden, has just made history as being the first model in Sports Illustrated to wear a hijab and burkini. The Kenyan-born model said it was “a dream come true.” Aden appears in the swimsuit edition, out in May.

Don’t change yourself .. Change the GAME!! Ladies anything is possible!!! Being in Sports Illustrated is so much bigger than me. It’s sending a message to my community and the world that women of all different backgrounds, looks, upbringings… can stand together and be celebrated. Thank you so much @si_swimsuit & the entire team for giving me this incredible opportunity.

“I keep thinking [back] to six-year-old me who, in this same country, was in a refugee camp. So to grow up to live the American dream [and] to come back to Kenya and shoot for SI in the most beautiful parts of Kenya – I don’t think that’s a story that anybody could make up.”

Sports Illustrated announced the newest member to their swimsuit family on Monday. The magazine said for Aden’s swimsuit spread, they chose to do her birth country, Kenya.

Aden spoke about living in a refugee camp in Kenya until the age of seven. She then moved to Minnesota, even making history at a young age by being her town’s first homecoming queen. She even went on to become her college’s first Muslim-Somali student senator. “After that, I remember thinking, ‘What next?’ And that’s when I came across the Miss Minnesota USA pageant.” Aden was the first contestant to wear a hijab in the pageant in 2016.

“I think this is amazing. Showing a diversity of women is important. It shows anything is possible.” said Arianna R., an LHS student.

“Don’t change yourself .. Change the GAME!! Ladies anything is possible!!!” said Halima Aden.