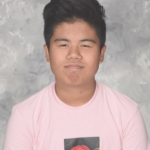 Lakewood’s track team saw plenty of senior additions this year, one of them being Jayden Reyes. He’s a field athlete who works hard no matter his size.

Jayden began track this year and has already shown immense improvement, adding 6 feet to his shot-put PR (Personal Record), making him the most improved on the team.

His work ethic is something to be commended as well. Very rarely he would miss a practice and never missed a meet. He was always willing to improve his game however he could, whether it be in the weight room or in the shot circle.

Discus wasn’t the easiest for him, as his hands had a hard time gripping them because of his size. He persisted on it and ended his season throwing comfortably in the 70 foot range.

When asked about finishing his senior year of track and the sense of accomplishment that came with it, he responded, “It was a great ride and I couldn’t have done it without my in-shape scholars. It felt great to participate with my friends and be a part of a team.”.

Coached by Mr. Murray, Jayden improved immensely overall and was glad to have spent the season on Lakewood’s track team. The senior class really blended well together and formed a unit of achievers and went undefeated in the conference.

Jayden was disappointed to end his season, as it will be his last. He wishes he began his track career earlier and had more time to perfect his game. He wishes the organization well in the future and hopes throwing is alive and well after he’s gone.