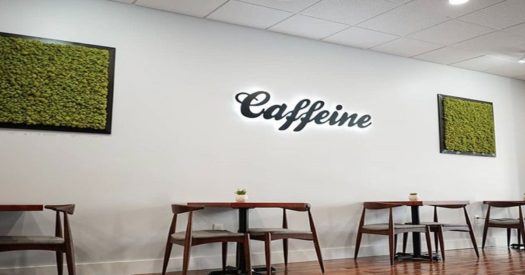 All of us know that the space between Panera and Sauced Taproom has been empty for what seems like years. Ever since Robeks left the location, many have wondered what was to be done with the empty storefront since it seemed that nothing was going to be done about it.

On April 17, the small business community within Lakewood gained another member. Caffeine is located at 14701 Detroit Ave. As the name suggests, the shop’s specialty is coffee.

They also serve a variety of pastries and croissants which include: meat lover, veggie, salmon, breakfast, chicken, and sweet. Each croissant packs a variety of ingredients from Nutella to salmon.

Pastries include cheese pinwheels, danishes, cinnamon rolls, chocolate croissants, and cannolis. Unfortunately, none of the baked goods are made in-house.

The menu seems small now, but owners say that they are still making changes to menus in order to make all of their customers happy.

However, a lot of people are making their reservations heard about the new shop. Some are saying that they don’t believe that it will last long with the existing competition and the Starbucks that will open. Others say that they’re disappointed all the owners could think of was another coffee shop.

In Lakewood alone, there are at least seven other small business coffee shops which include: Brewella, Addicted, the Root, and Rising Star. Again, those are the small businesses that specialize in coffee. It doesn’t even include the many, many chain restaurants like Dunkin’ Donuts and Starbucks

There’s definitely a lot of competition in this area, which is why a lot of people are disappointed in what the city allowed to be put in the empty storefront.

“It’s in a good spot for business,” said LHS junior Jerry Winch, “but there’s too much competition. I don’t expect it to last long. The coffee is okay, but not good enough to separate it from other Lakewood shops.”