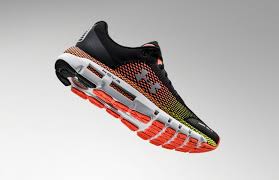 Another thing Under Armour is using is an extremely soft material surrounded by an insole of the shoe to give the people a soft landing that remains as protective at the end of someone`s run as it did at the start.  The biggest difference between this Under Armour running shoe and any other running shoe is that the shoe has run-tracking tech that’s built into the shoe. This would have cost you an extra $10, but it’s standard on this shoe in 2019 at no additional charge—the shoe comes with it whether you use it or not.

No other running shoes have this tech built-in.  This tracker tracks your run data like speed, distance, cadence, and stride length, sharing that data with Under Armour’s online platform Map My Run. This is when used with the app. The shoe cost 120 dollars and it comes with a lot of different colors and styles. This shoe shows that someone does not need a tracker when it is built in the shoe.

Senior Jayden Reyes said, “These shoes are pretty cool and they will save you money from buying trackers like a Fitbit or an Apple watch.”