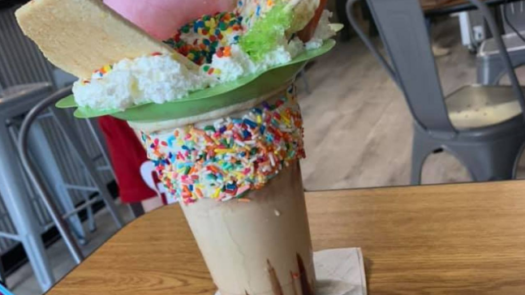 ▲
Here is the popular milkshake from Addicted.
Joe Ruggiero

▲
Here is the popular milkshake from Addicted.
Joe Ruggiero

In Lakewood Ohio, there is a coffee shop named Addicted that recently just released new milkshakes that completely blew up on Facebook. Addicted coffee shop address is 13743 Madison Ave Lakewood, OH 44107. They opened in September of 2017 and has continued to grow since then.

The owners Vincent Brunori and his wife Jeannie were surprised about how quickly this drink has blown up and how many positive reviews they got from it.  Vincent Brunori said that the line to get in was completely out the door on St.Patrick’s day and every time it started to shorten up it would get even longer. Jeannie Brunori said that her and her husband were thinking about starting some special offers soon involving the milkshakes, maybe even some BOGO’s.

Vincent said that the business is a family owned business and that he was lucky enough to find this amazing place in Lakewood available.  He also states that they both really enjoy being in Lakewood and think it was extremely lucky to have such an amazing community. Apparently, they will be partnering with Meijer’s and opening two new businesses in May at the Mentor and Stow locations.

“We’re family-owned and buy everything locally. We have a lot of vegan ice creams and we’re dog-friendly. We’re a community-based business that is trying to grow but wants to keep the personal touch,” Brunori told Fox 5 News.

The coffee shop sells many different coffee-based drinks a person could want and offers four flavors for the milkshakes. Another perk is how you can change any base flavor that you want. Leo Horvath, a freshman at Lakewood High gave his opinion on this new milkshake and said,”I think this milkshake looks pretty good, I might have to go get one for myself. Over all I would definitely order that if it was my first time there.”

Joe Ruggiero, the person who made the viral post, was shocked at how far the post got out and how well it did, “Absolutely insane, I didn’t expect the post to go as viral as it did, but I’m happy for them because they run a great business and have amazing milkshakes! I’m happy I could help them out,” Ruggiero said. The Vincent’s said that they were very lucky with this post and very grateful for it.