Fastest Car In The World 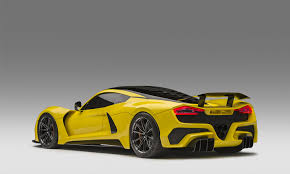 There are a lot of fast cars in the world right now, but The Hennessy Venom F5 is the fastest by all means. The Venom F5 is an all-new hypercar designed and built with one goal in mind: to be the fastest there ever was. The Hennessey team has developed a completely new design. Chassis and carbon fiber body focused on the car to achieve the lowest possible drag.

The new Hennessy Venom F5 design features active aero that will yield a coefficient of drag of just 0.33 and that is the fastest in the world as of now. The Hennessey team developed an all-new, twin turbo V8 engine that will deliver over 1600 bhp. The Hennessey engine will be mated to a 7-speed single clutch paddle shift transmission and delivering power down to the rear tires which no other car can do the same thing as this car.

The Venom F5 can accelerate from 0 to 186 mph in less than 10 seconds and from 0 to 249 mph in less than 30 seconds–that’s crazy. The top speed the Hennessey Venom has reached is 301 mph.  Hennessey has only made 24 of these cars. So it is really hard to find one and to get one for your self. The cost price for the Venom F5 is $1.6 million dollars, which is much more than your average car. The fastest car in the world come with a big price tag. Senior Will Adams said, “This car looks amazing and it is crazy that it goes 301 mph.”