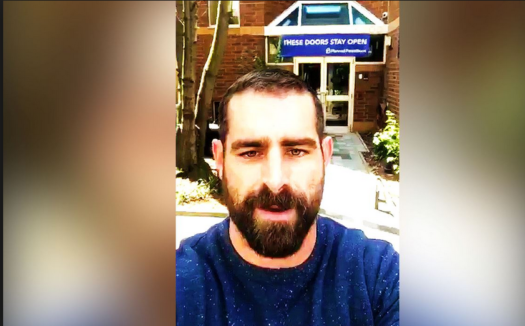 Pennsylvania State Representative Brian Sims was caught harassing an elderly woman who was praying in front of a Planned Parenthood clinic in Philadelphia. Every day, intellectual minorities on campus face attacks like the one outside Planned Parenthood in Philly.

Those who dare to step outside of the leftist groupthink place themselves in harm’s way, with pro-life students and Christians facing many of the most reprehensible attacks.

Take it from the prolife women who were threatened with rape by a Purdue University employee. Take it from the students of UC Santa Barbara who were assaulted by a “feminist studies” professor for handing out pro- life literature. Or take it from the Western Washington University students whose advertisement for a pro-life speech was burned by arsonists.

While America is shocked that an elected official behaved so disgracefully, the Leadership Institute’s Campus Reform has been reporting for years on examples just like this one coming from professors and administrators on our college campuses.

Bernadette Tasy, a student at Fresno University, was berated by a professor for chalking pro-life messages. The professor mocked her as he scrubbed her messages out with his sneaker. Obviously, he does not understand that the United States of America is a free speech zone.

Far too many young people are unaware of their rights and are intimidated into silence. The result is a generation that learns that free speech can be restricted by intimidation and even physical violence, if necessary to silence those they disagree with.

Local Lakewood High School student Peyton Leaf says, “It feels like a violation of someone’s beliefs and rights and is unacceptable, especially from a scholarly professor.”