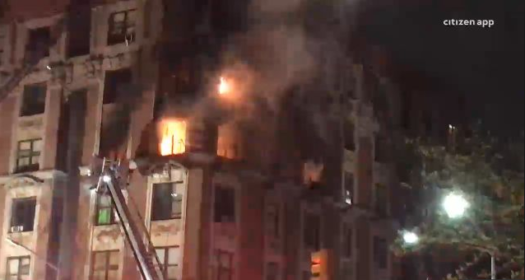 In New York City flames shot out of the windows of the Frederick E. Samuel Houses in Harlem last night. Today, on the building’s fifth floor, six-room apartment has been gutted and six people were dead,  and four of them were children, all of them were members of one family.

“I was the one who called first, and I heard the noise of them screaming, it was crazy, and the smell, too,” said one of the people who witnessed the horrific incident take place last night.

Also the children, who were three to 11-years-old, their 45-year-old mother, Andrea Palladore, and a 33-year-old male relative also died. All were found in their bedrooms.

Palladore’s other child, 27-year-old Raven Rayes, visited the building in tears after learning about this horrible tragedy.

“I really just can’t believe this happened, if they could hear me, because I know as bright as it is, they’re welcomed at the Golden Gates,” said Raven.

The building was built-in 1910, and had been renovated in 1994, it was operated by the city Housing Authority.

The New York Fire Department said the fire was reported at 1:40 a.m. The firefighters arrived up 3 minutes later and the building was already scorching up in flames.

“We believe the fire was an accident,” said Daniel Nigro, the Commissioner of New York City’s Fire Department.  “That it started in the kitchen on the stove, quickly extended out of the kitchen and eventually involved every room in this apartment.”

The fire commissioner said the that victims could not reach the front door, which were the burning kitchen was, or the fire escapes, which were on the other side of the apartment, away from all of the bedrooms.

Three other residents were treated for smoke inhalation, and the Red Cross is assisting families displaced due to the fire.

Lakewood High School’s very own Kaleb Weiss said, ” This is horrible, people need to be more careful when cooking in the kitchen. I hope everyone else will be alright.”