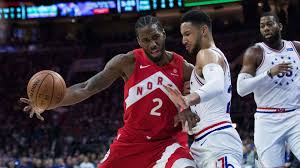 Kawhi Leonard came up big at the end of the 7 game playoff series. Both the Raptors and the Sixers came out on Sunday night looking jumpy. The crowd was on the edge of their seats from the start. This big game is important for both franchises, and the winner would advance to the eastern conference finals. With all the excitement neither team could hit a shot for much of the first few minutes. At the end of the first quarter, the score was a mere 18-13 with the Raptors up despite shooting 21 percent from the field.

Danny Green was no help in game 7, going 1-of-3 from the field with no threes. Kyle Lowry finished with 10 points and had early foul trouble, along with popping his thumb out and back in again. Marc Gasol locked up Joel Embiid, but he too was not finding it easy to hit shots being 3-of-8.

On the bright side, Ibaka had a good game leaving the court with 17 points, eight rebounds, and three assists. He would hit a pair of early threes and played stellar defense all night.

The game went on and it looked more and more like the game was going to end at the buzzer. At the end of the fourth quarter, A lead had been squeezed away, it was a tie game, there were only a few seconds left on the clock. The Philadelphia 76ers didn’t make the game easy for Toronto, tying the game on Jimmy Butler’s late breakaway lay-up.

LHS senior Jared Yocabet said, “God must have wanted that shot to fall.”

Toronto advances to face the Milwaukee Bucks in the Eastern Conference finals, which should be a fun matchup. Leonard will face off with another two-way superstar in Giannis Antetokounmpo, with the winner headed to the NBA Finals. It would be the first-ever Finals appearance for the Raptors, while the Bucks would be making their first NBA Finals since 1974.