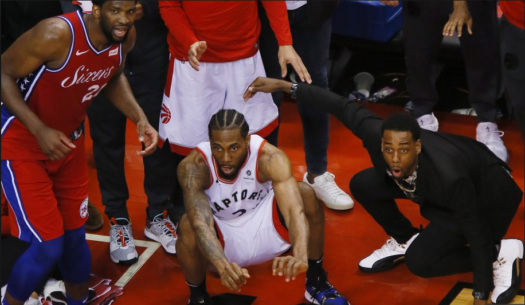 There were 4.2 seconds on the clock, The Toronto Raptors had were in bounding the ball. The score was tied at 90. The Philadelphia 76ers had to make one stop on defense to send the game to overtime. The Raptors got the ball to their best player, Kawhi Leonard. He dribbled down the right side of the court and shot a fading jumper in the right corner. The ball bounced on the rim one, twice, three, and four times and finally went in. The arena erupted.

Leonard finished the game with 41 points on 16-39 shooting. He didn’t start the game shooting effectively, but he got hot down the stretch and made maybe the greatest shot in Toronto Raptors history.

The defense was what made this game great. Toronto was shooting just over 38% for the game.

Leonard did not get a ton of help this game. Kyle Lowry, who is an All-Star but has been quiet this series, and Pascal Siakam, who has been a force all series, had a quiet game. However, big man Serge Ibaka had a solid 17 points on 6-10 shooting and grabbed an additional 8 rebounds.

Philadelphia’s Joel Embiid was their best player Sunday night. He had 21 points to lead the team. He played over 45 minutes. While he was on the court, Philadelphia was +10. In just the 2:49 that he rested, the Sixers were -12.

Local NBA fan Wilson Reynolds was raving about Kawhi’s performance. “He is playing like the best player in the league right now. I wouldn’t be surprised at all if they went to The Finals.”

A lot of people in Toronto are hoping the same thing. The Raptors have been to 2 of the last 4 Eastern Conference Finals. They are hoping that they can get over the hump and play on the league’s biggest stage.