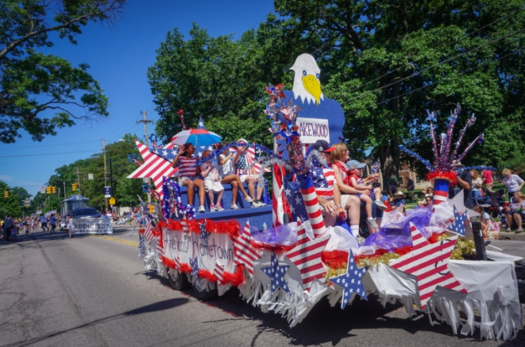 The time is slowly inching closer towards one of Lakewood’s renowned celebrations– the Fourth of July. Every year Lakewood hosts a parade and fireworks in the evening at Lakewood Park.

This year for the parade things will be slightly different. Normally the parade starts on Lake by Kenneth Avenue and heads east to finish at the park. Due to improvements to Lake Avenue, the parade will now head from Nicholson Avenue to Lakewood Park. The section of Lake that the parade is on this year has already been worked on, allowing for a smooth marching surface.

The improvements being made involve waterline replacement, sewer/plumbing issues, and repaving. For these take time and can not be pushed back any longer, which is why the parade location had to take place. The city had apologized for an inconvenience, but this should not take away from any of the fun the citizens have.

So far these are the only changes being made to the city’s special celebration. The parade will still conclude at Lakewood Park, the Lakewood Project will still perform at the band stand before the fireworks, and the fireworks will still be as amazing as they always are.

Mallory Moorman, a 4th of July lover, stated, “I do not think the changes will affect the amount of fun and joy that the parade brings to the community. Plus, it is only a one year change and will not be long-term.”

Overall, everything has stayed the same and you can be sure to endure the same amount of fun this Fourth of July.