Indians Get the Win 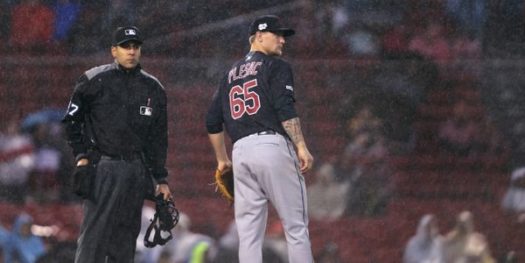 Zach Plesac made his big-league debut for the Cleveland Indians last night at Fenway Park. He pitched against the defending World Series champions Red Sox. Pitching for the Red Sox was the million-dollar man, David Price.

There was a rain delay for over an hour and the first pitch was thrown at the chilly temperature of 53 degrees. Try throwing 9 innings in cold rain…

Plesac was so excited to get out there he didn’t care about the cold rain. He pitched 5 quality innings before watching the hit rally from the Indians to put them at 7-5, with 5 runs in the 9th to get them the win.

This win is important to the guys because it’s only their 2nd win in the past 9 games.

The Indians has 2-5 at the beginning of the 9th but with homers from Roberto Perez and Greg Allen tied the score. Then Jordan Luplow’s two-run, bases-loaded double pulled the Indians to the lead with 7-5.

Brad Hand finished off the game on the mound for the Indians. He ended it by striking out J.D. Martinez with runners on 1st and 2nd.

“I was proud of the whole group,” said manager Terry Francona according to cleveland.com. “We had a tough week, but they kept on playing. They kept on having energy. I don’t care what time it is, we get to go home with a win.”

The game took 4 hours and that’s not even including the 1 hour and 9-minute rain delay. Morgan Harper a local student says she “wants to go see the Indians play this summer and she is excited to see how far the tribe will go.”