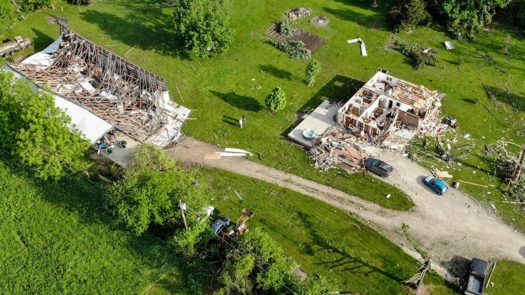 ▲
The after math of the tornados
weather.com

▲
The after math of the tornados
weather.com

Over the past weekend, storms have been hitting all over the midwest.  Southern Ohio got more than just heavy rain and strong winds. Southern Ohio had what to be believed as 3 different tornadoes touched down this weekend causing havoc.

The third tornado was the most catastrophic it left one man dead and destroy everything in its path. This tornado touched down in Celina, Ohio, a medium populated area about 70 miles north of Dayton.

The storm was classified as an EF3 tornado meaning its winds reached in excess of 136 mph.

The city of Dayton is asking its residents to conserve water since the water plants and pumps are without power due to the tornado. The city also issued a boil water advisory.

“It was the scariest thing I’ve ever been through, and it was the loudest thing I have ever heard,” said tornado survivor Miranda Dobbs.

The Red Cross has set up water distribution centers throughout the cities for people to get clean drinking water.

Lakewood’s Rob Holden said, “It’s crazy how close these tornadoes actually came since Dayton is only a few hours drive from Lakewood.”