Finally Another Installment in the Luigi’s Mansion Series 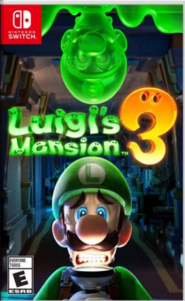 Luigi’s Mansion 3 is hypothesized to be a great game. Its controls appear to be very similar to that of the first game on the Gamecube and so does the game-play. This will leave nostalgia surging through many Nintendo fans.

At E3 2019, a lot of new features were revealed. This includes a few new locations, most notably the garden, which people have been anticipating the most. There are also new abilities given to Luigi and even a co-op mode. These will hopefully add many more opportunities.

The game takes place in a mansion and follows the character Luigi in his adventure to save Mario and rid the mansion of ghosts. It is a classic and loved by many gamers. Since its announcement on June 11, all Nintendo lovers have been excited for its release.

This game is being hyped up a lot by many different people. From the previews at E3, it seems like it will live up to the hype and be a solid game. Nintendo hasn’t had great luck at E3 in the past, but many people loved the announcement of this game. It has definitely made the hearts of Nintendo lovers, and Luigi lovers, very happy.