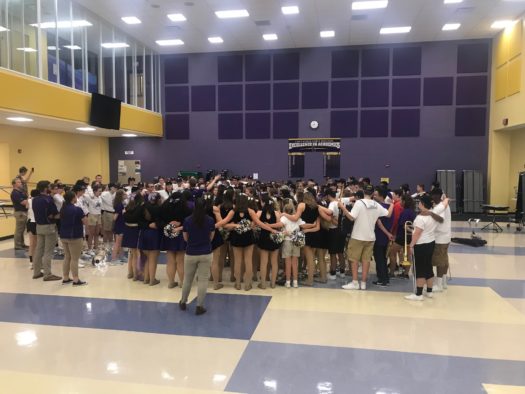 In the past, Eighth Grade Marching Band Night has taken place during the halftime show. Because of the massive storm headed straight for LHS, the eighth graders got a more memorable marching band experience.

At last week’s football game, with less than two minutes left until halftime, everyone was told to evacuate the stadium because of the thunderstorm. Marching band took cover in the band room and waited for their chance to perform.

However, this opportunity did not arrive. When the game was called, both the Avon and Lakewood bands headed into the cafeteria and improvised for the halftime show, while football fans hurried frantically to get away from the stadium.

The bands took turns performing four songs each, with Avon beginning and Lakewood closing. Lakewood’s last song was “Never Gonna Give You Up,” which was performed with the eighth graders.

The night ended in all of Lakewood’s performers singing the Alma Mater and shouting the LHS chant.

“We have never had a game before where we didn’t wear our full uniform- but it was too hot. It got cool very quickly and while we were warming up for halftime the storm showed up, so we zoomed inside. I feel bad that the eighth graders didn’t get to play on the field, but we did play our show inside the high school.”

When asked if he thought the improvised performance was beneficial to the eighth graders, Jamie replied: “I can’t see it being any more beneficial than playing on the field.”

Max Winters, current eighth grader at Harding Middle School that participated in the fiasco, shares his thoughts on the unplanned but wonderfully executed turn of events.

“While playing in the cafeteria was fun, I believe that it would have been more fun to play on the field for an audience of all, not just the parents of the band kids and the Avon band. However, I enjoyed my experience very much.”

This experience just goes to show that although things do not always turn out how you planned or expected them to, they can still be a memorable and valuable experience in your life.