The Place No Man Belongs, The Borderlands 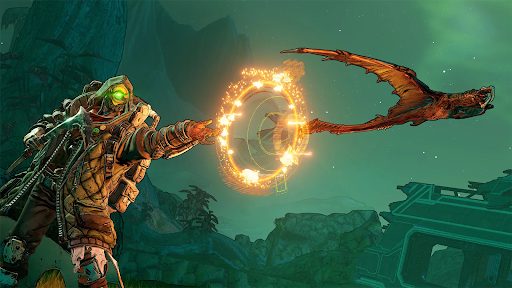 With 4 new classes being the Gunner, Operative, Siren, and Beastmaster you have all new ways to cause mayhem. Moze (Gunner) has the option of using one of 3 different skill trees giving her the option between a grenade launcher, rail-gun, or mini-gun allowing her to cause a lot of damage very fast. Zane (operative) has the option of using a barrier, digi-clone, or a SNTNL (attack drone) essentially making him a support character rather than an attack character.

Amara (Siren) can create an astral projection of herself, can use “phaseslam”, slamming the ground with great force, or can use “phasegrasp” grabbing the enemy from the ground with a giant fist. This can make Amara more balanced between support and attack style of character. FL4K (Beastmaster) has a companion at his side and he can use “fade away” allowing him to fire three shots while invisible all of which are automatically a critical hit, he can also use “gamma burst” which allows him to create a rift at a location teleporting his pet through the rift dealing radiation damage immediately and when his pet attacks an enemy, finally he can use “raak attack” which allows him to send forward 2 raak to dive into the enemy to deal damage but can attack multiple times. “With these skills FL4K is the most self-sustaining character of the four” says Jonathan Cupak.

Was Borderlands 3 worth the wait or was it over-hyped? The only way to answer this question is to play the game for yourself.