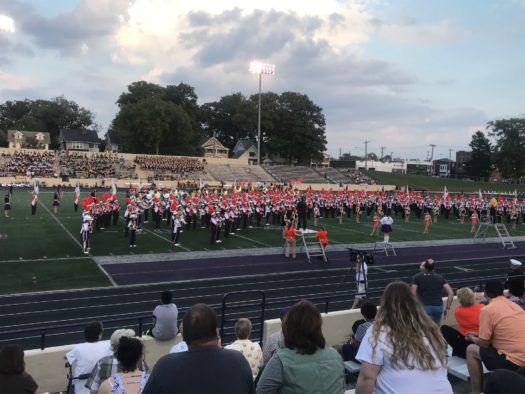 For years, marching bands from all over Ohio have come together to perform their halftime show at the Lakewood High School First Federal Stadium. This year, Lakewood was joined by high schools in Berkshire, Margaretta, Brush, Garfield Heights, and Riverside. Bowling Green University also joined the festival this year.

This was followed by all other marching bands performing their current halftime shows and showing the spectators their enormous amount of talent.

Lakewood closed the festival with a bang, performing “I Love Rock and Roll,” “Jump,” and “Take on Me.”

“I think that this year the marching band sounds really good. I think despite the heat, everyone performed to the best of their ability and it sounded amazing. However, the newer show was a little different. It was definitely much more stressful and wasn’t the best it could be since we didn’t have much practice.”

Lydianna was also asked if she enjoyed her first year being a part of the LHS Marching Band Festival.

“I did enjoy the experience. It’s so satisfying and enjoyable just to see all of your hard work pay off and look amazing. We are all a family in marching band, so doing anything with the ‘fam’ is such an enjoyable experience.”

All in all, the 2019 Marching Band Festival showcased massive amounts of talent, and both spectators and performers had a great time. Hope to see you there next year!