Abysmal Performance by the Browns 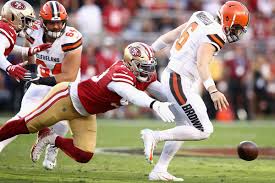 “Certainly not what I was expecting,” says avid Browns fan and senior at Lakewood, Harlan Hoegner.

The Browns took the field Monday in a primetime showdown with the undefeated San Francisco 49ers. A highly anticipated Monday Night Football game which was nationally televised. The 49ers have had a great and somewhat surprising start to their season going 3-0, now 4-0, while the Browns came into the game on a hot and cold streak, winning their last game against division rivals the Baltimore Ravens.

The Browns offense struggled to get started the whole game. Quarterback Baker Mayfield had one of his worst career games, completing under 50% of his passes for only 100 yards, adding 2 interceptions along with 2 fumbles lost. With the struggles at quarterback the receiving core also haltered, star duo Landry and Beckham Jr. combined for only 6 catches. The only silver lining was budding all pro Nick Chubb, who averaged over 5 yards per carry for almost 100 total.

The defense was unable to stop the 49ers relentless attack, giving up over 200 yards on the ground and 2 touchdowns. The especially struggled with preventing break away plays as running back Matt Breida broke away for an 83 yard touchdown on the 49er’s first offensive play in the game. The pass defense wasn’t any better as Jimmy Garoppolo, San Francisco quarterback passed for almost 200 yards adding 2 touchdowns.

Overall it was a bad game for the Browns as it truly exposed their biggest weaknesses. Our offensive line gives Baker little time to throw the football which leads to him missing throws and becoming inconsistent. Our defense has been missing our top 2 corner backs that should be returning soon, however there is no excuse to be that awful against protecting the run.

The Browns will look to make some changes as they approach an extremely tough portion of their schedule in the next few weeks, including a match up against Super Bowl champions and the still undefeated New England Patriots. The next few weeks will be a great test to see who these Browns really are as a team.