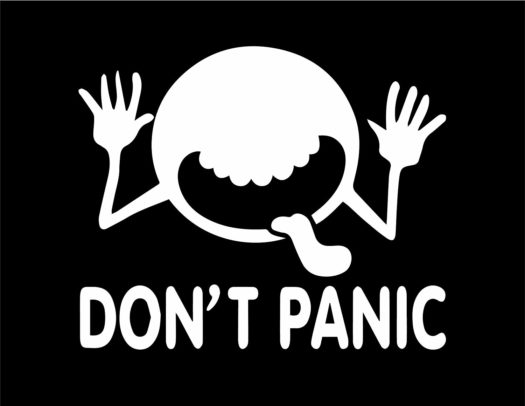 ▲
A simple yet effective quote from the book
Meme

▲
A simple yet effective quote from the book
Meme

The Hitchhiker’s Guide to the Galaxy by Douglas Adams is the first of five books in a series.

The Guide is a fun, chaotic book that will rocket you through space, destroy a few planets, travel you through time, and send you hurtling through several astral planes, all while making little to no sense at all.

Arthur Dent, a completely ordinary man living in London, suddenly finds his planet destroyed by aliens and himself whisked away on a journey through space by a man named Ford Perfect, a researcher for “The Hitchhiker’s Guide to the Galaxy”, a massive encyclopedia containing information on every planet in the universe.

They meet a pair of explorers, and go on to cause mayhem and destruction of improbable amounts throughout the galaxy.

My sister has also read this book, and she says, “Douglas Adams was truly a word master. Could anyone else have put the English language into a sentence such as ‘The ships hung in the sky in much the same way that bricks don’t’ and still make sense?”

The four books following this one are just as chaotic, and they are:

The Restaurant at the End of the Universe

Life, the Universe and Everything

So Long, and Thanks for All the Fish