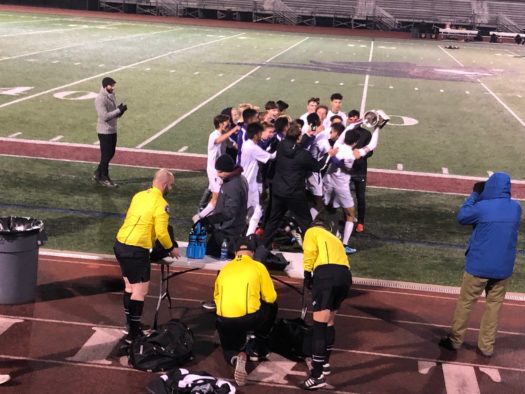 It was a brisk cold Saturday night last weekend as the Lakewood Ranger Boys’ varsity soccer team traveled down the road to Rocky River to take on their rivals, the Pirates.

Although these teams are not in the same conference,nor do they play in the same playoffs (until next year), it has become a tradition for these teams to square off on a chilly October Saturday before they go off into their respective tournaments.

It is always a good matchup when these teams play each other, both being very competitive programs. This game saw the Rangers winning by a close score of 1-0.

Senior Julian Kieres scored the lone goal for both teams late in the second half. He cut across the top of the box and shot the ball to the low left corner, just beyond the outstretched arms of senior Rocky River goaltender Connor O’Toole.

Kieres told me after the game: “Yeah, it was a difficult situation.There were lots of defenders around, but I made some space and took my best shot. The soccer gods were on my side.”

The Rangers were able to hold off the Pirates for the rest of the game, preserving their lead until the final whistle named them victorious. A fury of Rangers ran from the bench to celebrate together at the 50 yard line.

Senior captain Cameron Levis received the Riverwood Cup from O’Toole in a ceremonial presentation by the coaches. It was a terrific display of good sportsmanship from both sides and displayed the ability of these athletes to put the rivalry aside for their shared love of the game.

It was a great chance for the Rangers to hone their skills exactly one week before their highly anticipated OHSAA Division 1 playoff game versus Lincoln West. The Rangers lost to Lincoln West earlier in the season 1-0, but they have certainly improved and are the higher seed in the tournament.

The game will take place at Garfield Middle School this Saturday night, let’s get the Ranger Army out there to support the team in their big game! Good luck boys, and congrats on a fantastic season.