Will We Be Left Behind? 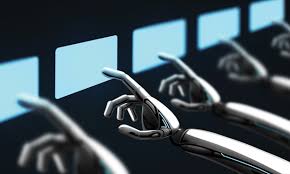 “Will we be left behind?”

This is a question that many people have asked and still remains unanswered.

Technology has been advancing for the entirety of man’s existence and how far it has come is an accomplishment in itself. Technology will continue to advance until man chooses not to anymore. When people think about technology and how it has improved, we sometimes think about having robots as servants or no one having to work anymore. This causes people to wonder what will happen if technology advances too far.

Robots may be able to predict things down to the .001 percent chance, but someone had to do it before that so the robot knew how to. After all, robots are just computer programming that do only what we tell them to do. An assembly line is made up of a conveyor belt and various robot arms all of which have their actions preset.

“Robots don’t do anything unless we tell them specifically what to do,” says Dalton Lammers, a Lakewood High School senior.

Robots can only do what they are coded or built to do (nothing more) and when they do something they aren’t supposed to do it is either because of human error or because of something that can’t be predicted or foreseen.

Recently there has been the release and invention of new AI (Artificial Intelligence) that can do some pretty amazing things, but still they are nothing more than a computer with programming and preset actions. Basically, technology can never be too advanced as long as humanity still exists.