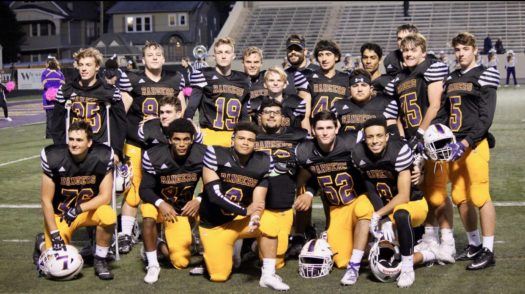 Last Friday, the Lakewood Rangers Football team won their first game of the season against the Westlake Demons. It was a brisk and overcast October night as the teams took the field.  Before the game, seniors from Lakewood were honored for their hard work and dedication. Football, Marching Band, Cheer leading, Golf, and Cross Country were all brought out on the field one by one to the roar of applause from parents and students. The Ranger army was out strong for this one, bundled up in their black gear as the seniors attended their last home football game at Lakewood.

“Football games are some of my best high school memories. I will miss it dearly,” senior Payton Rossen told me.

The Rangers have struggled this season, losing in their first 8 games, despite some close ones. The Demons served as their best chance to get in the win column.

Lakewood wasted no time in this one, jumping out to a 27-0 lead in the 2nd quarter. The 2nd half was a back and forth between the squads, exchanging touchdown for touchdown. Neither defense played well, however the Rangers offense was on fire and carried their early momentum all the way to the end, winning with a final score of 56-43–one of the highest scoring games in Lakewood’s history.

Talk about history-making! Several school records were broken by varsity players in this exciting game. Junior wide receiver Pete Patsouras caught 4 touchdown passes, breaking the previous record of 3. Congratulations, Pete! Along with this, Senior quarterback Albert Wilhelmy, in the last home start of his career, broke 3 school records for touchdown passes in a game (5), total yards of offense in a game (399), and passing yards in a game (391), a record previously held by him. Congrats to Albert on an amazing career and leading the Rangers offense for the past 2 years.

Lakewood will play its season finale this Friday away against North Ridgeville, and the players are saying this is another winnable game and should be an exciting match up. Good luck to the Rangers in this one and congratulations on a well-deserved win and a hard-fought 2019 season.