Can the Cavaliers make the Playoffs? 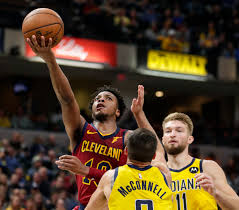 So Cleveland and the suburbs around it are praying that at least one team of theirs can make the playoffs. I asked a local Lakewood High School Student, Zaid Shean what he thinks of the Cavs making the Playoffs.

His answer was ” I actually don’t think that they can do it this year. They haven’t made any trades that would really help them to make the Playoffs. Of course I hope that they do but we’ll have to see.”

Right now it’s not really possible to be able to tell if the cavs could make the playoffs; it’s too early. The Cavs do have an  average performing team right now, so with a little bit of luck, we may see them in the Playoffs this again.