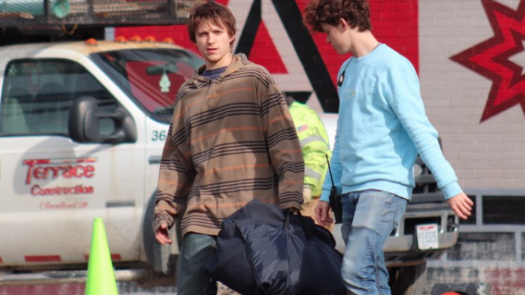 Cleveland is a big city that holds many famous things, we have many popular sports teams, exquisite restaurants, and even prime locations for movie production. There are currently two movies being filmed in the Cleveland area, one being the Russo brothers first non-superhero related movie, the upcoming film “Cherry” starring Tom Holland and many other popular actors including Ciara Bravo and Bill Skarsgård is based off of the book by Nico Walker also named “Cherry”. The book follows the life of an unnamed, mystery narrator who is addicted to drugs and has become a bank robber after returning from the war, all while only being in college.

Shooting for the movie took place in different locations around the Cleveland area. They shot a bank scene at the Pioneer Savings Bank on Detroit and also spent some time in the Subway. I was lucky enough to be able to see some of the action take place. It was a short scene but there were so many aspects to it. It was filmed completely indoors but they used special technology to manipulate how the scene would turn out. The crew used this big white piece of fabric to hold in front of the entire building to make the weather seem either cloudy or early morning. All the equipment was set outside including the monitors, the makeup and clothes, and of course the entire crew. I could also notice how long it actually took to get the scene correct, they must have re-shot the scene at least 5 times to get it right, on the outside even the extras and passing cars had to reset their places.  It was all very exciting to see, I was even able to catch a glimpse of the producers Anthony and Joe Russo, and Tom Holland all hard at work. Overall, the production of the film was very interesting to watch and I am very excited for the movies release next year.