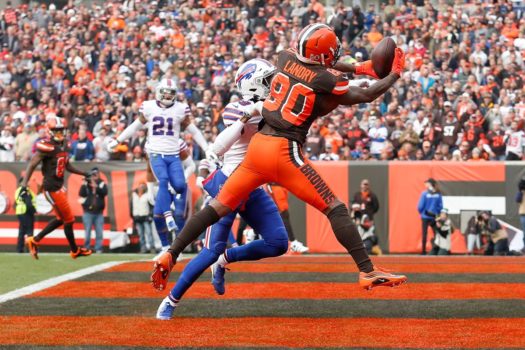 The Cleveland Browns entered week 10 of the NFL at a crossroads. They were 2-6, not an impressive start, and needed a win to keep their playoff hopes alive. 7 losses gives a team little to no chance of even a wild card berth so this was a crucial game for the Browns. They matched up against the 6-2 Buffalo Bills, who have surprised many people this season especially with their top 5 defense. It was set to be an intense game.

Lakewood High Senior Sean O’Donnell gave his opinion: “This is a must win for the Browns.”

Cleveland struck first on their initial drive as quarterback Baker Mayfield found wide receiver Jarvis Landry for a touch down pass. Bills quarterback Josh Allen answered in the second quarter with a rushing touchdown and the Browns added a field goal as the teams entered halftime with the Browns up 9-7. The third quarter proved to be a defensive standoff as neither team allowed a touchdown, with the Browns adding another field goal and the Bills sacking Mayfield in their own end zone for a 2 point safety.

With 5 minutes left in the game, Allen scored again on his legs to put the Bills up by 4 late in the game. It was going to come down to Mayfield and the Browns offense and if they could drive down the field and score a touchdown for the win. With big plays from Nick Chubb, Landry, and the winning touchdown catch from Rashard Higgins, the Browns were able to secure the big win.

Mayfield was huge in the win, completely a high percentage of his passes and protecting the ball well. He distributed to a large variety of receivers: Landry had 9 catches for almost 100 yards and a score, Odell Beckham Jr. caught 5, new running back Kareem Hun caught 7 out of the backfield, and Rashard “Hollywood” Higgins caught the game winning touchdown. Star running back Nick Chubb was fantastic, rushing for over 100 yards as he continues his great season.

The Browns defense provided consistency and timely big plays to keep the Bills in grasp for Mayfield and the offense late in the game. This was the definition of a team game. The Browns have 6 games left and are not yet mathematically eliminated from playoff contention!