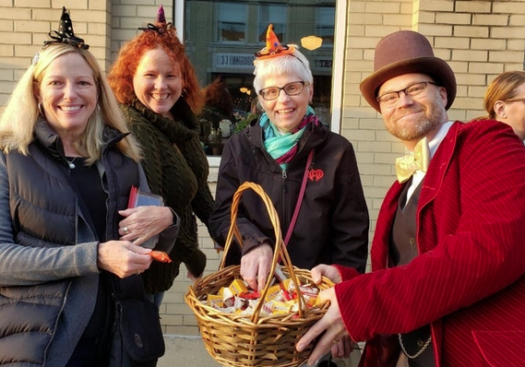 Lakewood had its annual chocolate walk with quite the crowd.  If you have never gone to it or have never heard about it the experience is like no other.  During the chocolate walk, there were over 30 sweet or savory stops to check out with over 350 people attending.  This year it was hosted by the Downtown Lakewood Business Alliance and Lakewood Alive.

If you were one of the first fifty people in attendance you would get a chance to check out Malley’s chocolate history and some of their treats from the past.  Not only would you get a great treat you would also get to listen to music from Lakewood Music Collective.

Now, this was just not any chocolate walk it had a special twist.  As you walked around tasting the chocolates you would be able to look at the treasure map or “golden egg” map which showed where 12 golden eggs were throughout the city at different sweet spots.

While there are limited tickets that were sold and it was first come first serve there were two different options available, VIP tickets and general admission.  If you had the VIP you were able to get into Malleys and enjoy the history of their chocolate as well as wine, beer, and appetizers.

With the general admission ticket, you would still get to taste many treats from all around the city.  When arriving you would have received a chocolate shop goodie bag and a golden egg map.

While speaking to senior Julian Kieres he said, “I didn’t know about the chocolate walk, but I wish I would have it seems like a fun night for a minimal cost.”

The Golden egg hunt was a new and exciting event that was added which has brought fame to this event.  It was a hit and everyone enjoyed this new aspect.  At the end of the night, everyone would meet at First Federal Lakewood and find out who won the 50/50 raffle and the winner of the Golden egg hunt.  If you could not make it this year there is no need to worry.  It is an annual event that is always trying to get more people involved for a fun November night.