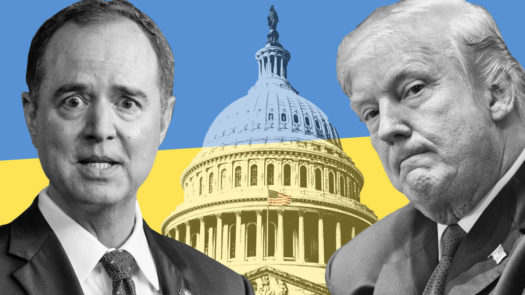 The impeachment hearings this week are being publicly broadcasted to all of America to argue the integrity of President Trump and his involvement with Ukraine. It all goes back to Trump holding secret calls with Ukraine were he inquired into “the investigations” into Joe Biden, his Democratic rival in the upcoming campaign.

Trump is being accused of dangling over $400 million in US military aid over Ukraine and an invitation to the White House in order to constrain the country’s new president to publicly announce a corruption interrogation into Mr. Biden, to cause embarrassment to the candidate. This allegation leads to the questioning of his impeachment and conviction.

Adam Schiff, the Democratic Chairman of the Intelligence Committee participating in the hearings, said the purpose of the inquiry was to establish if Trump “abused his power and invited foreign interference in our elections”.

“If this is not impeachable conduct, what is?” he added.

This is all done out of a blackmail standpoint, Biden hopes to run in the presidential election against Trump next year. It is illegal to ask foreign entities for help to win an election. Our President should have enough integrity to win on their own terms instead of broadcasting their faults that they have; it is sick and childish to do such a thing.

I asked two students from different political views about their thoughts and position on Trump’s Impeachment Hearing.

Grace Hoppel said, “President Trump should be impeached, what he did was uncalled for and can not be approved.”

While, Jaxon Storm Riley share the same opinion, “Trump’s position in office is going to come to an end so soon, so why is so much publicity being given Trump for his problematic tendencies, when the world’s publicity can be targeted towards greater issues? There is no use impeaching and convicting him with so little time until the next campaign.”

In my opinion, Trump should be impeached, convicted, and unable to run in the 2020 election for his actions. Sure, there are rivalries between the candidates, but it’s a whole other story to go to another country and bribe them into broadcasting humiliating content to damage their reputation; it is simply unfair and illegal.

Our President has been given too many second chances; enough is enough, this is the final straw.