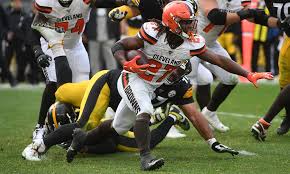 ▲
Kareem Hunt cuts back across the offensive line
BrownsWire

▲
Kareem Hunt cuts back across the offensive line
BrownsWire

This past Sunday, the Cleveland Browns took the field against their bitter rivals: the Pittsburgh Steelers. The Browns, riding a three-game win streak, looked to move to .500 for the first time since week 4. The Steelers looked to improve their playoff chances and move to 2 games over .500. This matchup also took place just 2 weeks after the Myles Garrett saga, so the tensions were certainly high.

Cleveland quarterback, Baker Mayfield, had a relatively average game when it comes to the stats, however he came up short in many important moments throughout the game. He threw late for one touchdown and one key interception. The Browns’ rushing attack managed to get them in good positions with Nick Chubb and Kareem Hunt, combining for over 100 yards. Hunt also recorded the Browns’ only touchdown on a reception from Mayfield.

Wide Receiver Jarvis Landry continued his success with a solid outing catching 6 passes for 76 yards. While Odell Beckham Jr. failed again to get on track with his quarterback, a disappointing trend this season. Hunt was a huge player in the pass game catching 5 passes.

This season brought very high expectations for the young Cleveland team, and so far they have not lived up to them. Barring a miracle, the Browns will not make the playoffs this season. Even with an improbable win over Baltimore, the Browns’ best possible record would be 9-7, which is rarely good enough to sneak into the postseason.

Senior Sean O’Donnell weighed in on the season: “A huge bummer.”

The Browns have some important decisions to make this post-season about moving on from some talented players who just haven’t worked out, starting over at the coaching level, and acquiring new pieces through the draft and free agency. Let’s hope they make the right ones.