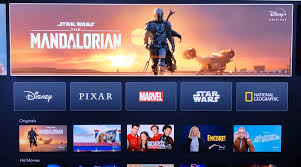 I think that we can all agree that Disney as a whole is a very successful business. With a net worth of about 130 Billion dollars, is no secret that Disney is a successful company. Disney has recently released new form of entertainment, called Disney Plus. Disney Plus is an on demand, ad free streaming service, where people can enjoy quality shows and movies.

Disney plus is already statistically bigger than Netflix, and it has been out for less than a month. Their content includes most of the classic Disney movies and shows, it premieres other company’s shows that were bought by Disney. As well as sports and science fiction. So the streaming platform can entertain people of all ages.

Kaleb Weiss, a student at Lakewood High School, thinks that Disney Plus is the future for the company. “With this new business model of including movies and shows designed to target an older age group, it is entirely possible that the company could improve its net worth astronomically.”

This allows the streaming service to bring in the most income it possibly can, and it is a great model for the company to follow. Disney has had a tradition of sticking to their family friendly movies, but with Disney Plus, they are switching it up and it is really working in their favor. Hopefully with this new business model, the company can grow and expand to attract even more people to the monumental following the company already has.