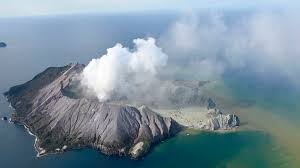 Earlier this week, 47 passengers of a cruise line got off on an island near New Zealand known as White Island; an active volcano that erupted shortly after the passengers arrived.

The search for the missing is difficult because, after an eruption, a volcano leaks poisonous gases and the terrain is extremely problematic to traverse. Somewhere around eight military personnel only were able to go to the island to search. They had an escort helicopter but could only stay for about 4 hours due to a plethora of things restricting their time, like fuel on the helicopter and the fact that the volcano still had a 40-60% chance of erupting again.

While many people were able to escape the volcanic island, two are still missing and believed by officials to be dead. Searching a completely ravaged island that may or may not explode is extremely taxing and costs a large amount due to it also being somewhat remote.

The 26 who did escape are in the hospital with at least 3rd degree burns around 30% of their body. The New Zealand hospitals that are treating them do not have enough donated skin to operate on everybody and the surgery to treat badly burned skin on one individual takes an estimated eight hours per person. Doctors and surgeons have been working nonstop since the incident on Monday.

The tourist company that had a building on the island and the cruise ship that brought them there are under a lot of flak because they allowed people and tourists to stay on the island even though they allegedly knew that the volcano was close to erupting. 6 weeks ago, geologists working in the area said that the threat level of the volcano had gone up from a 2 to a 5, a pretty drastic change considering it is a touristy region.

The New Zealand and Australian government promised to bring back the bodies of the dead to help bring the much-needed closure to the families whose loved ones disappeared or died in this tragic event. The Prime Minister Jacinda Ardern said “Today was all about returning them to their loved ones”