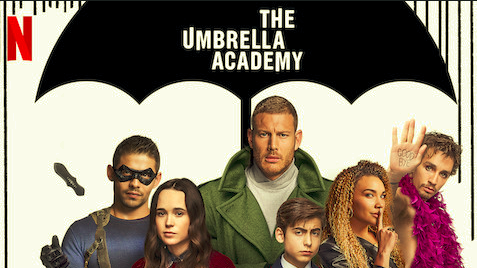 The Umbrella Academy is a television show based on a comic book series written by the band ” My Chemical Romance” lead singer Gerard Way. The Umbrella Academy is about 7 children adopted by a strange billionaire. These 7 children were all born on the same day, as well as 36 other children, who were all born with their Mothers being pregnant for no more than a day. These children were no ordinary children, as they were only born in just a day, but these children have superpowers.

This television show is extraordinary. Filled will mystery, emotion, and action. It can be streamed off of Netflix, with only one season but more will be coming soon. Starring Robert Sheehan, Aiden Gallagher, Ellen Page, Tom Hopper, Emmy Raver-Lampman, David Castaneda, and Justin H. Min as the 7 children of Umbrella Academy. With many more great actors. From “ Common Sense Media”  gives The Umbrella Academy a 4-star rating. And many more websites do as well. The Umbrella Academy has comedy, heart, action, and many more. I would give this show a 5-star rating.