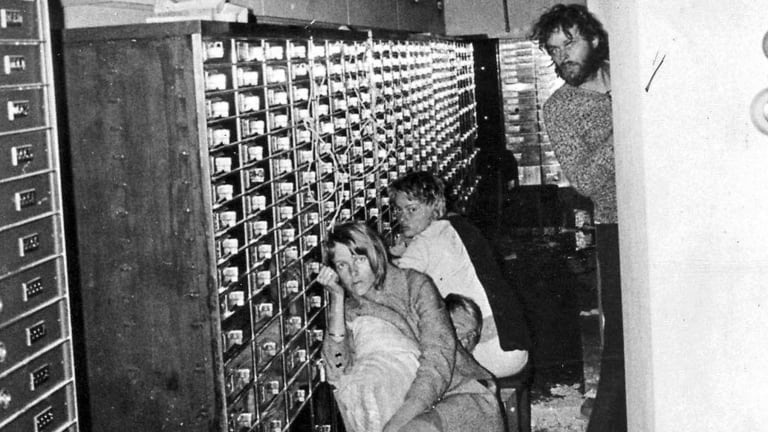 ▲
Hostages in the Kreditbanken Bank in Stockholm, Sweden.
History.com

▲
Hostages in the Kreditbanken Bank in Stockholm, Sweden.
History.com

On August 23, 1973, convicted felon, Jan-Erik Olsson tried to rob Kreditbanken bank in Stockholm, Sweden. According to History.com, “Olsson demanded more than $700,000 in Swedish and foreign currency, a getaway car and the release of Clark Olofsson, who was serving time for armed robbery.”

In a crammed bank vault, lied four hostages that were kept for six days. According to Britannica.com, “Stockholm syndrome is the psychological response wherein a captive begins to identify closely with his or her captors, as well as with their agenda and demands.”

It wasn’t long before the victims of this robbery/hostage formed a relationship with Olsson. It was as if they were soldiers stricken with wartime shell shock while becoming emotionally dependant on the enemy.

Enmark, one of the hostages, recalls Olson draping a jacket over her when she was shivering cold, comforting her when she had a bad dream, and even giving her a bullet from his gun. A couple of days into the robbery, Enmark called the Swedish Prime Minister, Olof Palme, and pleaded with him to allow her to go with Olsson and Olofsson in the escape car. According to History.com, she told him, “I fully trust Clark and the robber… I am not desperate. They have been very nice. But, you know, Olof, what I am scared of is that the police will attack and cause us to die.”

The only male hostage, Sven Safstrom told The New Yorker, “he treated us well.” Even when Olsson threatened to shoot Safstrom in the leg to stir things up, he still felt that Olsson was a good man. He stated to The New Yorker, “How kind I thought he was for saying it was just my leg he would shoot.”

Olsson told Birgitta Lundblad to keep trying after she couldn’t get a hold of her family on the phone. Elisabeth Oldgren was allowed to walk outside of the vault while attached to a 30 foot rope when she told Olson she had Claustrophobia.

On the night of August 28th, police pumped the vicious tear gas into the bank and this resulted in the end of the robbery.

The attachment that was formed between the hostages and the convicts boggled the minds of the police and the public. Psychiatrists recognized this to be what we now call Stockholm Syndrome.