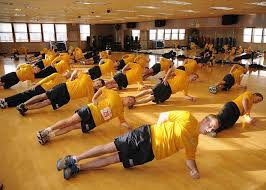 The United States Navy considers itself as the best Navy in the entire world. They have good reason to believe that too, with the best new technology in the world and plenty of numbers to boot. But as someone enlisted in the Navy I will be the first too tell you that the Navy does ask enough from its recruits.

In my opinion, the fitness requirements for the Navy are far below a standard that I would consider fit. The Navy doesn’t really ask its recruits to push themselves, and to a point I guess I understand why. When your are on a ship, surviving or winning a battle doesn’t come from the strength of the cadets.

Success in that area comes from teamwork and battle strategy. But, that being said, a sailor should be prepared to use their fitness in any way possible because you never know when that may come in handy.

To add along to that, collectively working as a team to better yourselves physically is a great way to build o bond, increasing the level of trust, and allowing the team as a whole to work better. In my opinion, it would be in the best interest of both the Navy and the nation as a whole if they would increase their fitness requirements.