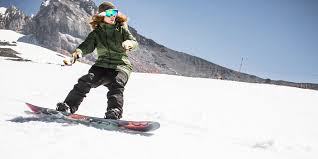 Ski and snowboard club is a very fun club  to be in. You take weekly trips to the local ski resorts and get to go have for with your friends in the snow for the whole day. At the end of year ski season, the class would take a trip up to a big name ski resort such as Holiday Valley in New York.

If you are interested in Skiing or Snowboarding, then it is never a bad option to join. But, there is a problem. Every year, there is less and less snow on the slopes. The Ski resorts try to prepare for this by having their personal snow making machines to blow around on the slope, but sometimes even that isn’t enough.

There have been a few weeks this year where we couldn’t go at all due to the lack of snow. Each year the temperature rise and it is hard for any sort of powder to stay stuck on the ground. If things don’t change, and change quickly, it is possible that the school could eliminate the club altogether.

Elijah Moncreif, a student and attendee of the club at Lakewood High School, says, “It sucks, man. Every year there is less snow. It was some warm out there at times where I could ski with just a shirt and some sweatpants. I don’t know how long they can keep the club going.” If something doesn’t change fast, the future of Lakewood High’s ski club looks grim.