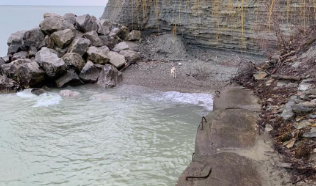 The Lakewood Fire Department is very well equipped with trained firemen and firewomen. They risk their lives everyday and night to save citizens of Lakewood, Ohio. On Sunday morning, Lakewood Firefighters were called out on a rescue call to a scene behind the 17800 block of Lake Avenue.

Prior to the call, the owner of the dog had been searching for the dog that got out of the yard accidentally.

The Lakewood Fire Department said they got multiple calls from those living off Lake Avenue Sunday who spotted the dog, but were unable to rescue the dog because of the conditions of the lake.

Lakewood Assistant Fire Chief Darren Collins said, “The water levels rose due to all of the rain we had this weekend and the dog just couldn’t get out.”

“The water was just to choppy due to the storms so we prayed that the lake would be calm and when we went down around 7 a.m. it was,” Collins said.

A resident was able to throw food down to the four-legged friend until rescue crews were able to reach the dog by boat.

He said eight firefighters assisted in the rescue and used an inflatable rescue raft to get the dog out.

“We were so happy to get the dog,” Collins added.

The female dog named Aspen appeared to be OK, and is back with her owner.  The dog is going to the veterinarian for a check-up now.