How Covid-19 is Affecting the Elections 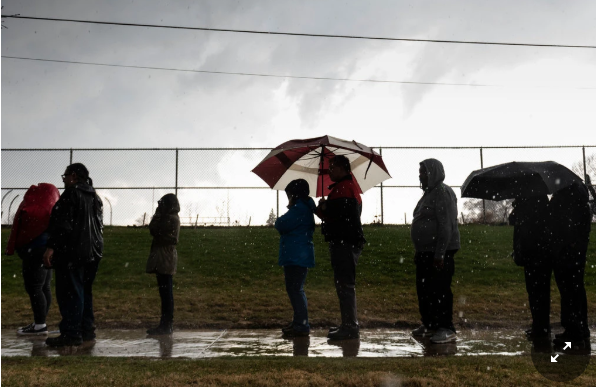 This year the Covid-19 outbreak has affected our lives in many ways, one of which being the presidential election.

With the virus affecting thousands of Americans, many citizens are pushing for an alternative to in-person voting as the “Go Out and Vote” groups are unable to make door-to-door stops.

The presidential elections are normally quite chaotic, with long lines, loud bickering, and all the research that goes into your final decision. It can be hard to even find the time, or will power to go down and vote.

On Tuesday citizens in Milwaukee were filled with fear as they gathered together in close proximity, waiting for their patriotic duty… a chance to vote.  Even before voting began, lines outside polls were growing with almost every citizen wearing a mask and gloves, Poll workers took every precaution as well, some even showing up in hazmat suits.

Democrats believe that a state-wide mail-in voting is absolutely necessary and all the more urgent after this incident. However, many Republicans are very opposed to this idea.

In a recent tweet, President Trump instructed all Republicans to “fight very hard when it comes to state-wide mail-in voting” as it “doesn’t work out well for Republicans.”

Citizens are now faced with the cruel decision of choosing between personal health and exercising their right to vote.

Although according to the New York Times, voting experts say that voter fraud in general is extremely rare, Citizens may soon be faced with the cruel decision of choosing between personal health and exercising their right to vote.