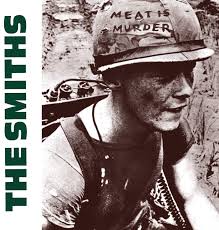 Meat is Murder is the second album by the English post-punk, indie band The Smiths. It was released in 1985 and was immediately popularized by its rhythm and groove. It was so popular that it stayed on the number one spot on the UK Albums Chart for thirteen weeks.

The topics that are discussed within the album perfectly reflected the mid- 80’s British indie wave that came right after the punk wave. It talked of abuse within the British school system, depression, hatred for the monarchy, and how meat equals murder. Morrissey’s strong voice drives the emotion and feelings behind their music.

The title of the album maybe deceiving of what most of the album is about but the title track sings accurately of how meat is murder.  “The flesh you so fancifully fry is not succulent , tasty, or kind…” Morrissey states in the song “…And death for no reason is murder”. That’s obviously a very strong take on meat consumption but it is reasonable as Morrissey is a Vegan.

Some of the other songs cover Morrissey’s struggles with school early on in his life and how school had somewhat ruined him. The first track, titled “The Headmaster Ritual”, describes the “Belligerent ghouls that run Manchester schools” and how they “Spineless” and had “Cemented minds”. Morrissey also tells of “Bruises bigger than dinner plates” from being beaten.

This album changed how I felt about The Smiths and, with a total run time of 40 minutes, I would highly recommend just sitting and listening through in one sitting as it has an amazing flow throughout its entirety.