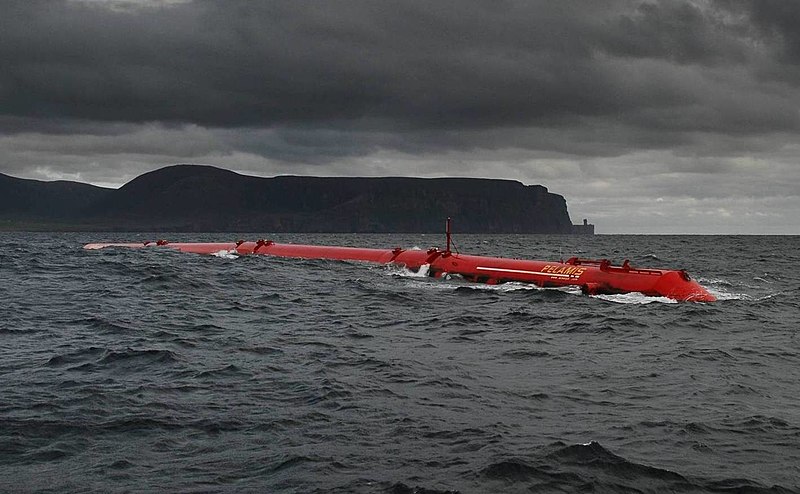 ▲
This is an image of the Pelamis Wave Energy Converter
Wikipedia.com

▲
This is an image of the Pelamis Wave Energy Converter
Wikipedia.com

Wave power is a new type of renewable energy. It is basically the capturing of wind waves (waves generated by the wind blowing up against the water) to do work.

People were using this method as a source of energy back in 1890, but it is only now being brought back and improved upon.

In the early 2000s, the world’s first commercial power wave device was installed on the east coast of Islay in Scotland, and it is called the Islay LIMPET.

To make this work, the waves have to be slightly slower than the wind that is generating them. When the wind is faster than the waves, there is an energy transfer occurring. We can then take this energy and convert it into electricity for our everyday lives. “I have never heard of this before. It sounds cool,” says Sam Stallbaum; a junior at Lakewood High School.

Some environmental effects this could have are the risk of marine life getting hit by the turbine blades, effects from electromagnetic fields, and other underwater noises harming the marine life, it can alter the behavior of marine animals, such as attracting or repelling them, and more.

This type of renewable energy has lots of potential because it will never run out, but it isn’t as efficient as other methods. There are only certain places that these wave farms (a patch of power wave devices) can be put in to get the most energy they can, such as the western seaboard of Europe, the northern coast of the UK, and the Pacific coastlines of North and South America, Southern Africa, Australia, and New Zealand.