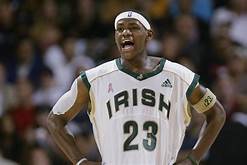 It’s no surprise that Lebron James has won another championship.

All the rings he has are well deserved. But to really get an appreciation for LeBron, we have to look back on how he got to where he is today.

LeBron James was born on December 30th, 1984 in Akron, Ohio. He started playing basketball in 5th grade and joined a rising team called the Shooting Stars. He and three other friends had great success and promised to all attend the same high school.

James was an outstanding high school basketball player and got attention on the national level. His entire high school career he averaged 30+ points and nearly 10 assists per game. He and his team (St. Vincent-St. Mary) traveled the country after winning back-to-back state championship titles.

James was named Ohio Mr. Basketball and got selected to join the USA Today All-USA First team as a sophomore. James was also featured in Slam and Sports Illustrated, both of which are well-known sports magazines. During this season, James also tried to petition for the changer of the NBA draft rules but was not successful.

During his senior year on the Fighting Irish, James and his team played against Oak Hill Academy. The game was nationally televised. During this season, Jamesaveraged 31 points per game and was seen as an unstoppable force in high school basketball.

Later in his senior year, James had a career-high 52 point game and went on to win the Fighting Irish’s third championship.

Although LeBron James was extremely talented at basketball, he was also an outstanding football player. He played with his school team for two years and some experts say he could have gone pro.

In 2003 James was selected by the Clevland Cavaliers as the first overall pick in the draft. In his first game, he scored 25 points breaking the NBA record for most points by a rookie his first game and went on to winning Rookie of the Year.

From here on out, the rest is history. LeBron James is arguably the best basketball player ever. He won back-to-back championships in Miami and came back to Cleveland even after all the hate we gave him.

LeBron will go down as the greatest player in history, he is only 35 and already has accomplished so much.