Mother Told to Breastfeed in Private 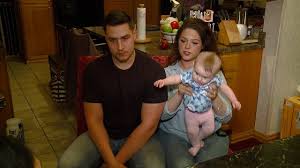 A mother, Lauren Chambers, with her young Daughter, Aydriana, and her husband, Dameyan Chambers were in the Lakewood Men’s Cut’s on Detroit ave. on a Tuesday afternoon.

“I was asked by the owner to go into the restroom and feed Aydriana if a man walked in because she didn’t want a male customer to feel uncomfortable”, said Lauren. She was furious at what happened

Lauren went to social media and posted everything that happened. There was instantly a tidal wave of people coming to the aid of Lauren and supporting her, saying that what the owner did was wrong, and that a woman should be able to feed her child whenever and wherever she wants. There was, as you probably have guessed, a million-and-one (crazy)feminists saying all kinds of things about how a woman should never conform for a man.

“We’ve had tons of support, which is great. Lauren doesn’t want to do any harm. We were put in an awkward position. It wasn’t a good experience at all”, said Dameyan.

The owner of the barber shop, Mae Williams, apologized(practically groveled) for the incident saying, “I breastfed my kids too when they were little. But as a small business owner, I didn’t know the law”.

The “law”, according to the Ohio Revised Code, states that a mother is entitled to breastfeed her baby in a public place.

“I honestly did not know. I made a mistake. I ask for people’s kindness and to give me a chance. I didn’t know”, said Williams “Look, I’m all for women breastfeeding wherever they want. And I honestly hope that no other small business ever experiences the negativity from people they’ve never met like I have”.

Williams is getting so much internet hate, that mothers in Lakewood are planning to protest in front of the store.

“I’ve been in restaurants before and not even gotten a dirty look. No one has ever said anything. I feel that if no one in a restaurant is uncomfortable with me breastfeeding, why should a guy in a barbershop feel uncomfortable?” said Lauren.

The owner of the store got a lot of hate for what she said, but do you think she deserved it? Because I would have said the same thing. I personally feel unconformable around mothers breastfeeding and I know others who feel the same way. It’s something that should be done in private and if it was my store, I would have told Lauren the same thing.