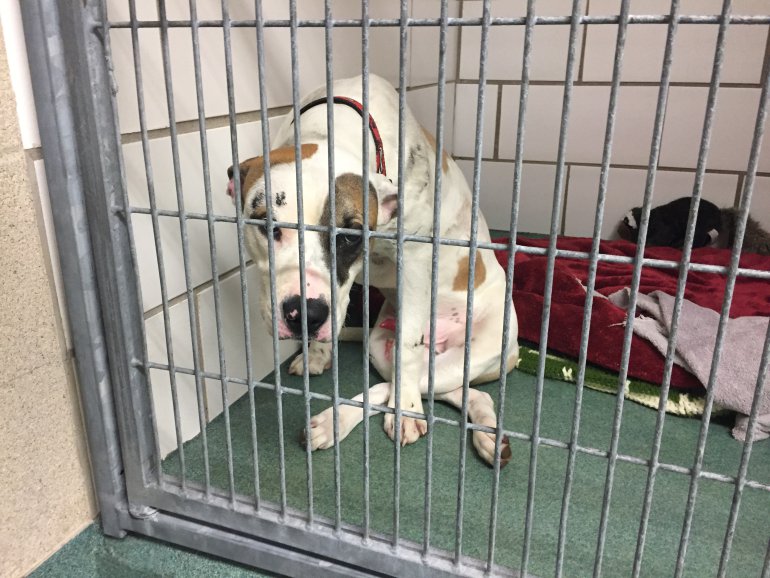 Animal Cruelty today is all too real. Animal neglect is the failure to provide basic care required for an animal to thrive. Severe neglect can lead to permanent injury or death. The Animal Legal Defense Fund maintains a database of criminal animal cruelty cases. In the last ten years, over 30% of cases tracked involve animal neglect.

Recently The Cleveland Animal Protective League increased the reward for information leading to the suspects who beat a dog. The dog,(Indiana Bones) was beaten by three men. On the corner of East 111st and Superior Avenue on March 9th is when it all went down. According to the APL, the group took turns attacking the dog with sticks and bricks.

The APL is now offering $4,000 to the first person who comes forward with details leading to possible suspects. Veterinarians said the pup had been hit by a car before the beating. He had his first surgery to repair his hip and knee on Wednesday. He’s now in a long-term foster home.

Anyone with information is urged to call the Cleveland APL’s Humane Investigations Hotline at 216-377-1630. Some of the biggest Animal neglect cases come from puppy mills. Puppy mills are large-scale commercial dog breeding operations.  Several dogs end up with illnesses like kidney or heart disease from being in a puppy mill. Dog-fighting became popular in the US after the Civil War.

It was a source of entertainment for police officers and firemen. Today dog-fighting has been reported in urban, suburban, and rural settings in all regions of the country. Animal Cruelty is no joke. Why would you ever to hurt something so innocent. Animals are not born evil, they become evil by the environment that they are brought up in.

If you know some one who is abusive toward their animals, loved ones or ever children, I urge you to report them and have them removed from the situation.

Be the change you want to see in the world, one dog at time.