The Zodiac Killer, Who Was He? 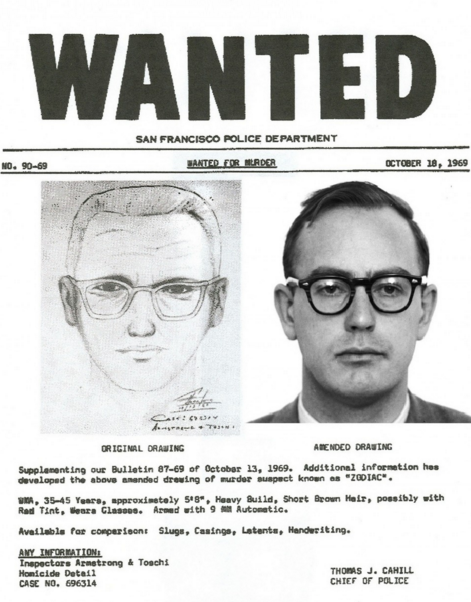 As one of the most notorious unknown killers of the 20th century, The Zodiac Killer is confirmed to have killed five people, injured two, and claims to have killed 37.
The Victims (COnfirmed):
On the night of December 20, 1968, David Arthur Faraday, age 17, and girlfriend Betty Lou Jensen, age 16, were killed in their car on the side of the road in Vallejo, California. There was no evidence as to who killed them or why.

On July 5th, 1969, 22 year old Darlene Ferrin and 19 year old Mike Mageau were attacked in their car near Blue Rock Springs Park. Ferrin was pronounced dead but Mageau, seriously injured, gave a description of the attacker.

On September 27th, 1969, Bryan Hartnell, age 20, and Cecelia Shepard, age 22, were out picnicking by Lake Berryessa in Nappa, California. They were approached by a person wearing an executioner’s mask with a weird symbol on it. The attacker tied them up and stabbed them repeatedly. Shepard died at the hospital but Hartnell survived.

On October 11th, 1969, Taxi cab driver Paul Stine was shot in the back of the head by a passenger. A number of teenagers witnessed the attack and gave a description of the attacker.
The Suspects:
The first suspect is Earl Van Best Jr. who was accused by his own son Gary Stewart. Although he resembles the man in the composite sketch of the actual attacker, and has the same number of letters in his name as the attacker, he does not match the description of the large, heavyset man that was seen in three of the attacks.

The second suspect is Arthur Lee Allen, accused by Robert Graysmith. Ironically, the same day of the third Zodiac killing, Arthur Lee Allen told his family he was going to the exact location at Lake Berryessa where the attack occurred. He is said to have came home covered in blood with a bloody knife in his car. Additionally, one of Allen’s friends Don Cheney says that Allen referred to himself as the Zodiac before the killer did so publicly. There are more things connecting Allen to the murders, but we will get back to that later.

The third suspect is Lawrence “Kane” Kaye accused by retired police officer Harvey Hines. In 1962, Kane was in a car accident that resulted in brain damage. His name (Kane) can also be seen in a letter that the Zodiac wrote stating “My name is _______.” with a ciphered message underneath. The second victim, Darlene Ferrin, had a sister who claims that Kane had been harassing Darlene until the day of her attack. Kane also lived near the victims and/or the locations of the attacks. Kane moved to Lake Tahoe in 1970. In that same year, a possible victim of the Zodiac named Donna Lass went missing. She worked at the same hotel as Kane.
Who do i think did it?
My best educated guess would be that suspects Arthur Lee Allen and Lawrence “Kane” Kaye either worked together or took after one another in trying to keep the zodiac alive. Although, there is a possibility that suspect Earl Van Best Jr. could have been the killer too. Van best is said to have a resemblance to the composite sketch that was drawn up.

The ciphered letters that the unknown killer had sent to the public have yet to be completely solved.