No Respect for Sharks 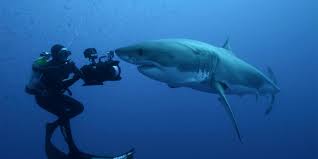 Since 1975 sharks have had a bad reputation because of the popular movie Jaws. Sharks have been looked at as killer beasts who live in the deep sea that hunt on humans.

In reality sharks don’t show any type of interest in humans because humans are not apart of their food chain. There have been times where sharks have mistaken surfers for seals because of the way their peddling.

Sharks have always been on top of the food chain hunting fish and keeping a natural balance in the coral reefs.

There are over 400 different species of sharks but when sharks are mentioned most people tend to think of the Great White Shark and how aggressive it is.

Other types of sharks only hunt on plankton and on smaller fish but show no threat to humans. Sharks show a very shy personality and tend to hide from humans. They hunt during the night and rest throughout the day.

On the other hand humans show a threat to sharks. There has been multiple occasions where humans have captured sharks because they thought that the shark has attacked a human or just killing them for their fins to use in the popular dish shark fin soup.

The shark habitat is in danger as well due to global warming of the oceans and the water pollution. It’s estimated that a 100 million sharks are killed every year. For an animal that rarely shows any harm for humans they should be shown more respect.