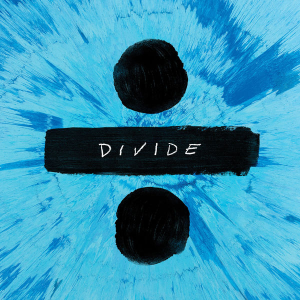 This year, on January 6th, English songwriter Ed Sheeran released a new album titled ÷, or Divide.  This is Sheeran’s fifth album, and, in my opinion, his best.  Sheeran’s hit Thinking Out Loud from his last album X is a tough song to top but this album has several that will be contenders. The sixteen songs on this album range from sappy dedications to his grandmother, upbeat love songs to traditional Irish.

Galway Girl and Nancy Mulligan are contemporary pop songs with Traditional Irish music woven in.  Nancy Mulligan is my favorite track both for lyrics and music.  The blend of old and new is a refreshing chang I’m sure they will join the top ten playlists like the already popular Shape of You.  Shape of You sounds a bit more upbeat than the typical work of Sheeran.

One of the most powerful songs lyrically is Supermarket Flowers, a homage to his recently deceased grandmother: “Oh I’m in pieces, it’s tearing me up, but I know A heart that’s broke is a heart that’s been loved.” Even the toughest listener will have their heart-strings tugged. Rounding out the album are equally impressive songs including: Eraser, Castle on the Hill, Dive, Perfect,  Happier, New Man, Hearts Don’t Break Around Here, What Do I Know?, How Would You Feel,  Barcelona, Bibia Be Ye Ye, and finally, Save Myself.  Ed Sheeran kicked off a world tour to provide Divide.

Tour dates continue into 2017 with stop in England, South America and Canada.  You can see Divide at the Quicken Loans Arena on September 9, 2017.