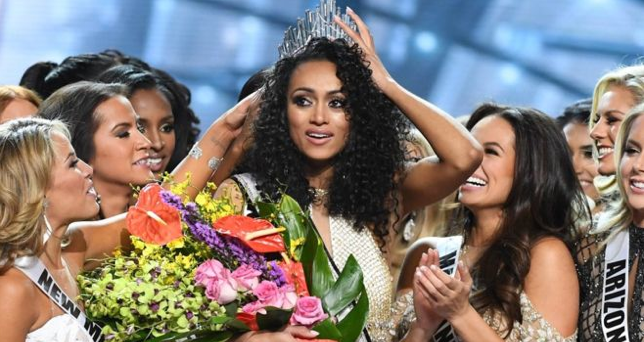 The Miss USA pageant was held on the night of Sunday, May 14th. The preliminary round of the pageant was held last week, where all contestants are judged in swimsuit, evening gown, and interview portions. From there, the semifinalists were chosen and broadcast on live television. All semifinalists compete in swimsuit and evening gown portions again until three finalists are chosen. The competition was fierce as Miss Minnesota, Miss New Jersey, and Miss District of Columbia were the three finalists. After these three women proceeded to the final interview competition, it was announced that Kara McCullough, Miss District of Columbia, has been crowned Miss USA.

This is the second year in a row that Miss DC has been named Miss USA. It was an emotional moment as last year’s Miss USA, Deshauna Barber, got to crown McCullough.

Kara McCullough was originally born in Italy. She is now a scientist at the US Nuclear Regulatory Commission. During the interview portion of the competition on Sunday, she said that she believed that healthcare was a privilege, not a right, and that in order to have healthcare you should be employed. This statement divided viewers pretty quickly. McCullough has been receiving significant backlash for her stance. She also said she doesn’t want to be considered a feminist because she prefers the term “equalist.” She said she would love to see more women employed in government science jobs, but she doesn’t hate men.

Miss Ohio hasn’t won the Miss USA pageant since 1978, but we are the only state with a contestant who has won the pageant twice (Mary Katherine Campbell, Columbus) in 1922 and 1923.