Should Banned Books Be Read in School? 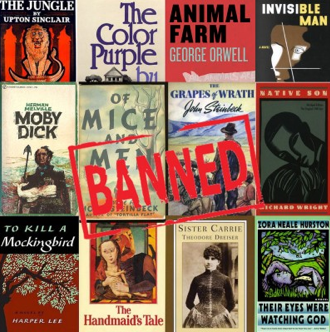 This has been a question for all schools to face at the very least once. Should schools allow their students to read banned book for classes or should they steer their students clear of reading them? This is more a question for elementary schools or middle schools and not so much high school but it still is an important question.

Books are banned if it contains some of the following; Racial Slurs, Sexually Explicit, or Offensive Language. The American Library Association is in charge of banning books and have been since 1990.

Whether we want to realize it or not children are learning about all of this stuff by the internet. The second you put a phone in their hands or sit them in front of a computer is when they can look up anything they want to. This behavior is also shown in television shows and once they sit themselves in front of the television they will be opened to the real world.

There is no reason students should not be able to read banned books in high school but the real question is when should they in middle school. The problem with banned books is that some of the best books are banned and if students do not read them they will be missing out on a lot of great authors and stories. Many of these books are educational and you can pull multiple meanings out of almost every one of them. They are full of great story plots and in general they are usually well written books and you should not miss out on reading them.